A Deviation from the Theme

Tonight Popeye decided he was going to cook dinner, as he usually does on the weekends (that's the only time he is home!). Awesome! I decided to alleviate some of my boredom and check out some new (to me) vegan blogs. One of the blogs is posting 30 days of gravies for Vegan MoFo which I thought was pretty cool. I planning on making her cashew gravy, and I'll post a link to her blog once I have made it. Another new to me blog pointed me back in the direction of Vegan Dad's blog (not new to me - I love his blog!!) and more specifically his post for vegan boneless chickenless wings from 2008. They were just what I felt like and I thought they would go well with Popeye's planned fried rice meal (which turned into a nasi goreng type dish - that's how he rolls).  As a bonus,  I had all of the ingredients except the required amount of panko crumbs (I only had 3/4C of panko and topped it up with some bread crumbs from La Panella). 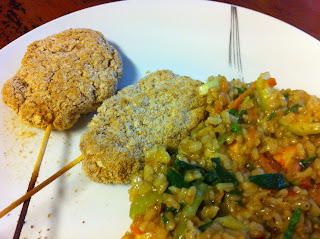 They were really quick to make and tasty to boot! I think I'll have to make a double batch next time as we all had 2 each and the kids were looking for more! If I didn't run out of energy at this point, I would have made an awesome sauce to go with it.

Vegan Dad's blog has a link to a chicken style broth recipe but the link is broken. I found this one which someone in the comments suggested the original may have been from.

Now I need to go through my next cookbook to see what I'll be making next week (guaranteed I WON'T be making anything Monday night - I've got day surgery planned). I've been quite impressed with Passion For Pulses this week, I hope the next one is just as good.

Mmmm faux chicken on a stick!

Food looks crazy good! Reminds me of a fabulous vegan resto I used to frequent before I got too busy managing a Chinese Restaurant in Capalaba area. You just inspired me to go out more!