Last weekend I wanted to test out a dish that I am hoping to take to Steph and Danni's Chinese New Year's Eve vegan pot luck (is that still on???) and I needed tempeh. I was sure that last time I purchased said product it was from the Wooloworths/Safeway down the road. Obviously not!

Panicked, and wondering where the hell I got it from, I called on my old friend, the internet. Nothing came up locally (there MUST be more than 1 decent health food shop in my locality!), but I was inspired to jump in my car (seriously! I NEVER use my car!) and head to Vincent Vegetarian Food in Footscray.

My trusty GPS showed me the way and before I knew it, I was staring at freezers and shelves lined with mock meats! Now, I have had this discussion before somewhere, but my take on the whole mock meat thing is this: I am not trying to replace anything that I 'gave up', rather I find it fascinating and exciting that we have the ability to create some really amazing foods. I don't even dwell on the fact that it is supposed to represent meat in any way, I just enjoy the novelty (which is another point about processed foods - it is something we do very infrequently). So what I am trying to say is DON'T HATE.

Anyways, I picked up a couple of things (how could I not, especially after driving there) as well as the mysterious tempeh. 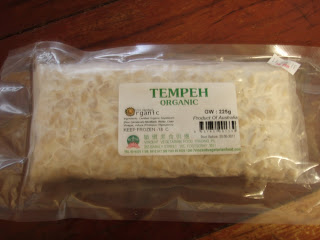 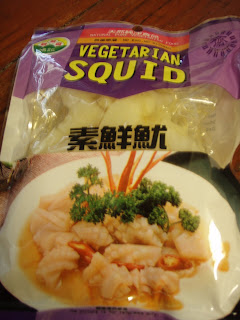 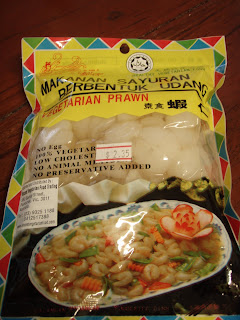 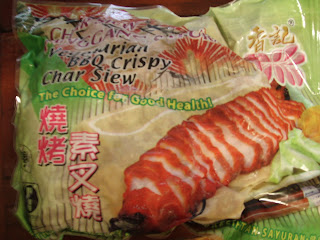 I made a rather tasty coconut cream dish with the 'seafood' and also tried out the pot luck dish (which was a keeper, too). I bought the packet of BBQ Char Siew (Siu) to try as Steph tried the one I usually use and said it was average. And since I am definitely NO expert on Char Siu, I thought I would try another brand!
Can anyone tell me of a closer place to purchase tempeh and other goodies instead of having to use my car to go to Footscray? I'm looking at Preston, Northcote, Thornbury, Brunswick, even Fitzroy areas (as a matter of fact, I can go as far as the city, I can ride my bike that far!). I know there are plenty out there, but because I am relatively new here (BTW how long can I get away with saying that? I've been in the Northern Suburbs for a year now and Melbourne for two years. Is it time to stop the helpless newbie victim talk??) I do not know where they are and which ones are good. It is usually only by the roll of the internet that I stumble across anything.
Now I know you are waiting for my Bali post(s), but the truth is that I am putting it off because of sheer laziness! I have to transfer the photos from my little net book (so no disk drive) to my Mac and although it probably will be quite quick and simple, I haven't got my head in that space yet. Nearly...

that's easy - preston is your first destination. there are a few asian grocers, but the one i always go to is a few shops down from la panella, and at the back they have a large range of tofu and tempehs, and they did have (but i think it's since been removed) a freezer full of vincents products. There's also a vincents in richmond, mix asian grocer at barkley square in brunswick is good too. and there's a couple of excellent asian grocers in the city - one is 24hrs near vic markets and it also stocks vincents stuff, and the other in in china town off lt bourke between swanston and russell.
and yes, the chinese new year pot luck is still on!

Thanks for the info!
I forgot to mention that my first port of call was my favourite asian shop on High St (Big 8) and couldn't find it anywhere. So I asked and the guy looked at me strangely and asked what is was called in Chinese! Now that you mention it, the other shop which i don't often go to (I find it annoying with 3 kids in the small, small aisles!) has some wonderful frozen stuff from memory. I'll go check it out!

Glad to hear the pot luck is still on! I'm still working on one of my dishes - I tried a sweet dish and it was nice, but not worthy of a pot luck! You going? See you there!

Hey Pip, which one are you talking about near QVM? I didn't think any of them stocked mock meats.

I just went to Vincent's today, Tahn! Caught the train and everything. It was a bit of an adventure to a new side of town for me.

Hi Tahn,
I think the Radical Grocery store stocks tempeh. There's also a place in Brunswick called Henry's Seafood Plus (near Savers) where they stock a few of the Vincent style groceries (and possibly tempeh) I like Vincents tempeh because it tastes really good and it's soooo much cheaper than the brand you get at the supermarket (plus I can get it in Wantirna - way closer than Footscray!) There's also Habib Wholefoods - 260Flinders St - I haven't been there but have read about it (has cheezly, etc) I love tempeh by the way!! - fried with potatoes, onion and ginger - and chilli - plus a little soy sauce - so easy and yum!

How funny is it that us bloggers seem to be on the same wavelength at times!! Especially when someone blogs about the food they have made, and you've cooked the same thing!!

I hadn't been over that way either Steph (although I was quite proud that I recognised some landmarks along the way!) as it is a bit far to ride!

Oh I forgot to ask...Didi you find the love letters, Steph?? Is that why you were over there?

I forgot about the RGS! I really liked the tempeh from Vincents, too. And only a couple of dollars!

I find Habib wholefoods a bit expensive (premo spot for a health food shop though!), but it probably evens out the cost by not using the car etc.

this is for steph: it's at the bottom of a building of student flats on the qvm side of elizabeth st, you walk up a bunch of stairs to get to it. i haven't been inside but i know they stock a bunch of mock, probably vincents stuff

a cautionary word to peeps - a lot of vincents stuff, especially their pork and sausage products have whey and i think some may even have eggs. it's kinda frustrating.

The Wholefoods shop next to SoulFood on Smith St, Fitzroy, has a few different tempehs. There's also the Asian grocer called Bamboo something which is also on Smith, south of Peel St.

And the Asian grocer on Brunswick St, Fitzroy, near Hanover St.

I find the stuff at coles/woolworths a bit yuk actually.

Tahn, yeah, I was trying to find love letters. No luck! I've got one more place to try (maybe later this arvo), otherwise I am giving them up for not in this city! Sadface.

I agree, Niki! I always make my first stop at the Asian shops, as they are always heaps cheaper too. And their tofu is much nicer and much cheaper.

Yeah Tahn, Asian grocers rule! I'm like you - can spend hours just looking at all the creative, wild and whacky things they come up with that are so often vegan. It's not about replacing meat, it's about the novelty of trying something new!

Radical Grocery, Brunswick Wholefoods, Coburg Coles, Thornbury's Naturally on High... Rad Groc and Coburg Coles is the cheapest of that lot! But not as cheap as Vincent's.

I'm pretty sure Friends of the Earth on Smith St also has tempeh. I think it's the good one too.

I've seen a very peculiar repertoire of vegan seafood in some Asian stores in Finland, like vegan catfish. I've never eaten normal cafish and have no idea what it tastes like, but it surely seems a bit bizarre.