Boy have I had it with Blogger! I was very tempted to turn to Word Press today, although when I tried to download the zipped file (for Word Press) I couldn't work it out (in my defence we were on the way out, so I didn't spend to much time on it!). My issue with Blogger is still the photos issue- it won't recognise newly uploaded photos from iphoto- even if I turn it off and restart it! Grrr! This is why I have not posted so much! So I just worked out a L-O-N-G way of getting them to be able to be uploaded. So annoying, but they are here!

Here are the rest of my Bali photos. I am going to overload you with photos today, hope you don't mind! They are my favourite ones - some about food, others about fun. I hope you enjoy! 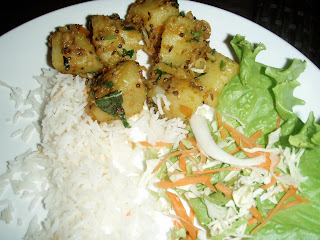 This is one of my meals at an Indian restaurant BEFORE I discovered where the locals eat! It was nice, just not very exciting. 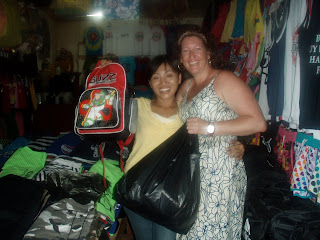 As you know, I rarely include photos of myself (I HATE photos of myself!) but I just HAD TO include this one! The Buzz Lightyear backpack was what I was using to carry my stuff around Bali. After making a couple of purchases at this market stall, the lady asked if she could have the backpack for her son who was starting his FIRST day of school the next day. It didn't take long to convince me (how could I deny that request??) and I unloaded all of my stuff into the big black plastic bag she gave me. Little did I know that I would not be able to find a new backpack that I liked (for quite a few days actually!!) and I had to carry ALL my stuff from Poppy's Lane back to our hotel a few hours later! 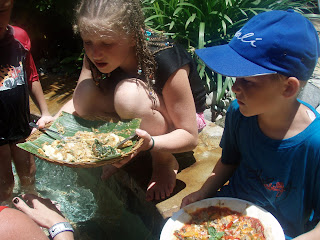 Here we were at Water Bom Park which was directly across from our hotel! (We ended up coming here twice!). Tweenie had ordered Gado Gado once before and liked it, so she thought I would be a good veg option here. Unfortunately this version was waaaaayyyyyy too hot for her (and they had mixed in egg to it). As you can tell from the look on her face she did not enjoy it! 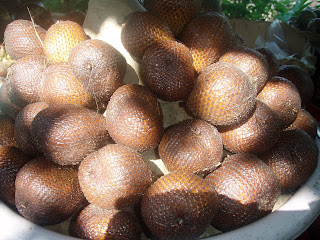 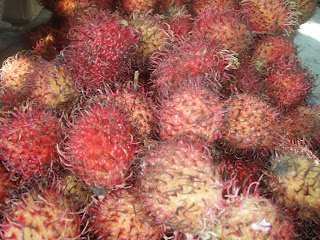 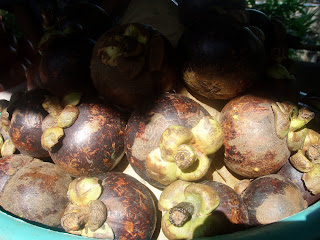 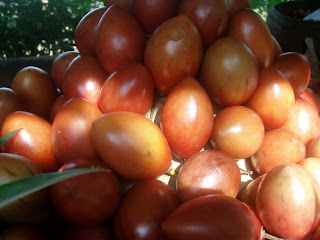 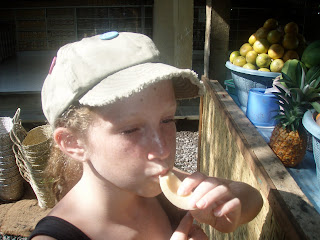 Tweenie trying some fruit. There was also mangos, passionfruits among others 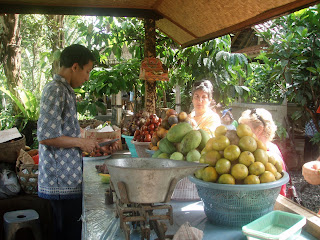 These photos are all at the start of the BEST day I had in Bali. We were picked up and driven out of Bali for about an hour before we stopped here. This was only the first stop for the day. There was coffee and hot cocoa testing (which I didn't try because I hate hot drinks) before we moved onto this section where we could taste all of this amazing fruit and then purchase it for about $A1 per kilo! The range was amazing and exotic! I ended up purchasing quite a few kilos of fruit which we happily munched on for days! 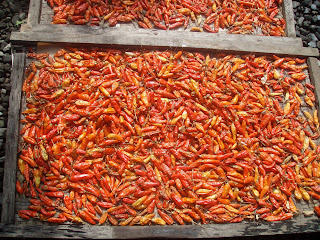 On the ground near the fruit were these chilli's drying in the sun. Such brilliant colours. 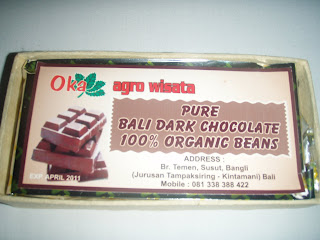 They also sold this AMAZING chocolate! All VEGAN! I bought 2 blocks (and didn't take long to gobble it all up!). 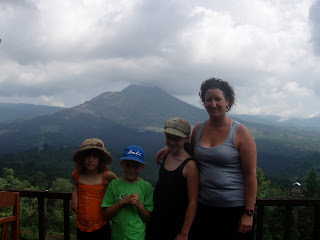 We were then taken to the restaurant at the bottom of the volcano for breakfast. It was here that I discovered Pineapple Jam! One of the workers raced up to the local mart and bought me 2 jars of it (which I ate before we left Bali - it was a delicious addition to the hotel's breakfasts). 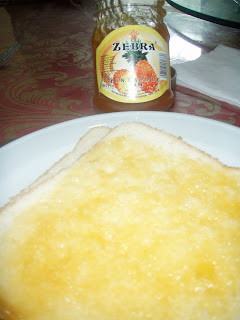 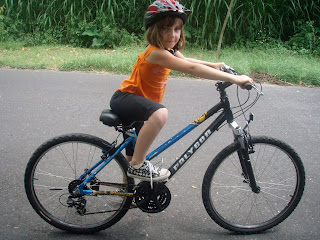 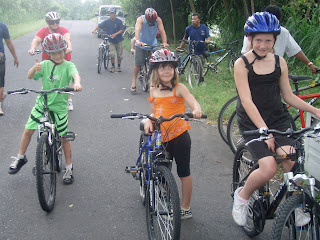 The main event of the day was a couple of hours bike ride through some local villages. My whole family and a couple of my aunt's friends went along for this adventure (there were 13 of us all together). It was sooooo much fun! The bloke who runs it uses locals to help out when they have a big group. The business was called Celebrity Cycling Tours and I highly recommend them. Riding through the little villages with children waving and shouting 'Hello' to us was great! It was the 'culture shock' I was aiming for with my kids. They loved it too and had no trouble with cycling for that long (it does help that our bikes are our main source of transport here!). 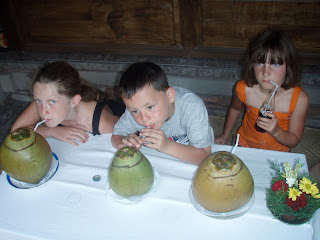 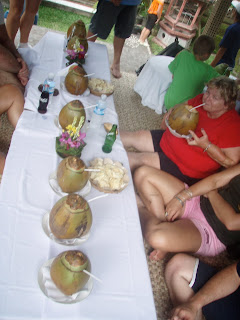 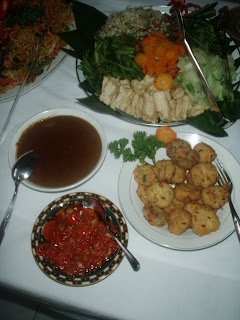 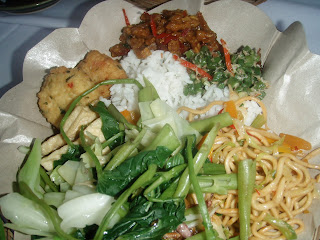 This was THE highlight of the day. We completed the ride by stopping at the tour owner's house where his mum and sister had cooked a feast for us. When we booked (the cycling tour) we let them know that 4 of us were vegan and they said it would be no problem catering for us. I was AMAZED at the wonderful array of vegan food available to eat - it was at least 50-50 with omni food (I was preparing myself for rice and a veggie dish). The other bonus was that a lot of the others didn't like the fresh coconut so I gorged myself with fine food and extra coconut milk. If you ever go to Bali, go on this cycling tour! I can't recommend them highly enough! 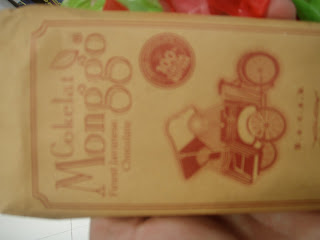 Ugg! Sorry for the direction of the photo! Mongoo chocolate from the department store next to the hotel (we stayed at the Bali Garden Resort) as recommended by Lisa. 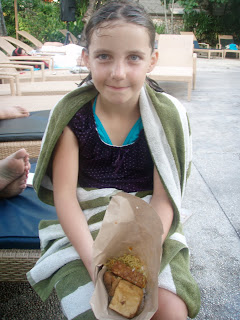 Awesome local food parcels by the pool of the hotel! This is what we lived on for lunch and dinner once I discovered where the local food was! Each parcel was less than $A1!!!!!!!!! 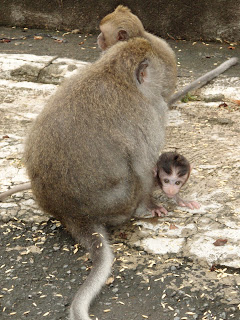 This was at the monkey forest. Sooo cute!! I was a bit reluctant to go here, thinking it was some sort of exploited zoo, but it turns out that they are free. There were so many monkeys! 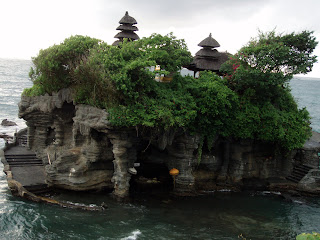 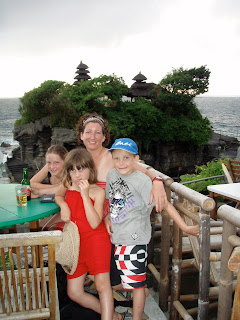 After the monkey forest (which was after the wood carving place- they are amazing carvers!) our driver took us to Tanna Lot. It is a fascinating temple built in the ocean that can only be accessed during low tide. We wanted to get there for sunset (as did a million other tourists!) as the sun sets directly behind the temple providing a beautiful backdrop. 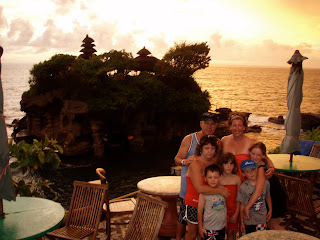 Although the picture quality isn't the best, I love this photo! It is of us with my Aunty Tina, Uncle Mike and their grandson Dylan (who they care for full time). They are my favourite relations and were my rock when all the shit blew up with my (ex) family. Love you all!
So there you have it....the best pics of my time in Bali. Of course there are a million and one other photos (I WAS there for 12 days) but rather than bore you with them (like a grandma with baby photos!) I have chosen the ones that mean the most to me. Hope you enjoyed them.
Tahn
Posted by Tahn at 6:23 PM

I'm glad that there were some good bits to your holiday!

Rambutan is my FAVOURITE, did you like having it fresh? And pineapple jam, yummy yummy. I'm excited by all your delicious foods!

Ugh! you always get me :)
It's been changed!

Loved it fresh! Loved all the fruit there!

Ahaha, I didn't even notice!

The fresh fruit is so delighful - even the bananas and things I think have a great taste!

the passion about your holiday is lovely to hear and it all looks so interesting - makes me want to go there - now!

Great photos..Know what I had fun viewing your photos especially on the part that I can see the volcano..That is really nice!!And I love rambutan also,the taste of that fruit is yummy...That fruit is very juicy which I like most!!Lol!!thanks for posting those photos..!!

Great photos..Know what I had fun viewing your photos especially on the part that I can see the volcano..That is really nice!!And I love rambutan also,the taste of that fruit is yummy...That fruit is very juicy which I like most!!Lol!!thanks for posting those photos..!!