We've all tried making nachos of some description before, but tonight I wanted to try the recipe from Hot Damn and Hell Yeah by Ryan Splint and Vanessa Johnson. This cool cookbook arrived on the day I was leaving to go to Bali in January so I didn't have time to have a good look at it.

The nachos recipe (p. 34) consists of a few different recipes and I used the Taco and Burrito Fill (p. 33) - except I used a tin of Sanitarium Casserole Mince (I have a heap of them lying around!) instead of TVP. I also wanted to try the Cheese Sauce (I'm always up for a new variation of recipes I usually use), p. 5 and Almost Sour Cream (p.10). I had a jar of salsa, so I used that and topped it with spring onions. 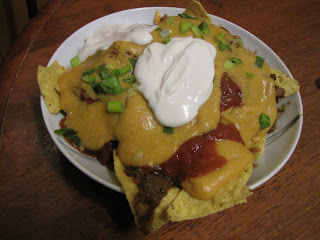 The nachos were delicious! All the kids scoffed them up even though they had a little bite to them (not nearly as much as the recipe calls for, though!) - they must be getting used to it! Time to turn the heat up a bit!

For dessert I whipped up the rest of the silken tofu (that I used for the sour cream) into a whipping cream and a peach crumble, both recipes from 1000 Vegan recipes. mmmmmmm
Posted by Tahn at 8:30 PM