Today I made up a fruit salad to use up some fruit (gee, that's inventive I hear you groan) 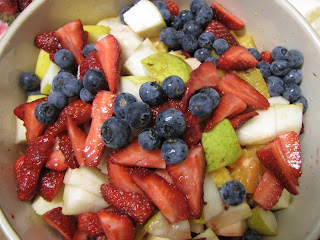 And after dinner Tweenie made some custard to go with it...yum!

Isn't it crazy that fruit can sit there all week, but cut it up, put it in a bowl and call it fruit salad and it is gone in 2 seconds flat!

For dinner YM decided he wanted spaghetti, so I told he if he wanted it he had to make it. So he did, with a little help from Baby. Some say I am a lazy parent, I say I am training them up to be independent!

I wish I had taken a photo of it, but it was scoffed down real fast! He boiled the pasta, and made a sauce with mushrooms, onions and mixed veges. (Remember he is only 8!) And it wasn't bad, either!! Kitchen was a bit of a mess afterwards...gotta work on that!

Last night, while laying in bed, alone (only 85 days to go...), I kept hearing a banging noise. Finally I got up and went outside to see what the noise was, and it was fireworks!!! 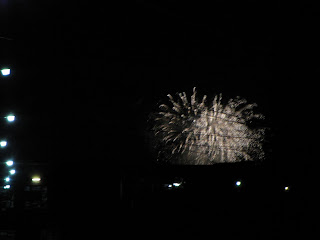 From my bedroom window I have a direct line of vision to the city's skyscrapers and I managed to snap this, albeit crappy & unprofessional, photo. The next door neighbour had come out a few seconds after me to investigate and I was caught in my PJ's! So I quickly ran inside after only this one shot. I'm wondering if the fireworks was from Fed Square celebrating Geelong's Grand Final win?? Anyone know??

And now for something a little different.....

Time for a little offloading.
My B-I-L rang today and asked if I would watch my nephew for a few days, which I happily agreed to. He said they were going to come about 4 ish. So a while later I phoned back and asked if they wanted to stay for dinner while they were here. He hummed and harred a bit then asked 'What are you going to make? Vegetables?" Then he declined the offer. He's a big meat eater, and that's his choice, but I felt...Gee I don't know what I felt. A bit pissed off, I suppose, that he was being so condescending. Anyway, feel a little better for getting it off my chest.

I've found a recipe for Asparagus Soup that I am going to make tomorrow. Look forward to posting about that!

forget about him, he is very closed minded if all he can think about is meat meat meat

Actually I was going to make him my 'famous' (in this house at least!!) Indian feast which consists of dahl, chickpea curry, coconut pumpkin curry, aloo gobi, couscous, flat bread and papa's and chai biscuits for sweets, so he missed out! I like to make food for people, but don't have anyone to make food for! haha

i'd hardly call that just "vegetables"!

isn't it funny that some people can't picture a meal being complete without meat, but i can't call it a meal unless it's full of veggies!