Keen for some Quinoa

Quinoa is such a funny name (just like seitan, agave, and other names I can say in my head, but I have never had to say them out loud). I’ve actually never eaten quinoa, let alone cooked with it!! Can you believe it?? I bought some a few months ago with the intention of giving it a go and I am only just trying it now!

I found this recipe at Savvy Vegetarian but made some adjustments (mostly because I didn’t have some of the ingredients). The original recipe asked for 1/4C currants but I think hot fruit is WRONG!!!! 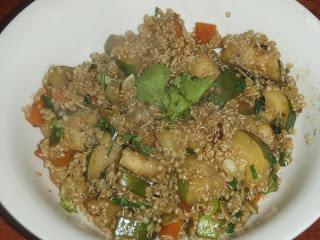 a small handful of pepitas (I had no sunflower seeds)

Soak quinoa for an hour, rinse, leave to drain. Preheat oven to 180C. Heat olive oil in a frying pan. Stir fry leek until transparent. Add carrots, stir fry five minutes. Add zucchini, stir fry one minute. Add the spices, except for the fresh coriander and pepper, lower heat and stir until they start to brown. Put all ingredients (except fresh coriander and pepper) into a casserole dish. Stir in 1 3/4 cups boiling water, cover, and bake 20 - 30 minutes, or until all the water is absorbed. Before serving, remove the bay leaves and cinnamon stick. Stir in the minced fresh coriander, fresh ground pepper, and serve

The original recipe also asked for celery but that is one vegetable that I can’t stand! It is so overpowering in every dish I have had with it!

This dish wasn’t bad. A bit bland, but the kids liked it (probably because it was bland!)

Today we went for a really long bike ride. We tried to find Dight’s Falls but couldn’t! We found a sign that said ‘Dight’s Falls 250m’ with an arrow. So we followed it only to come across another sign with an arrow pointing back towards where we had just come from saying ‘Dight’s Falls 500m’. WTF!! So we gave up and found a cool park to eat our picnic lunch and played on the playground. On the way home we stopped at other parks and went around the Brunswick Velodrome a million times to wear ourselves out a little more! All up -   4 hours of continuous exercise and about 18 kms of bike paths!!

When we got home Tweenie said “my vajeena is sore’ and YM said ‘So is mine!” We all rolled on the floor laughing as YM is a boy and therefore does not own a ‘vajeena’! hahaha

(note: we do actually use the correct names for our body parts in this house but Tweenie considers herself a bit of a comedian!)

Looking forward to the start of VeganMoFo III tomorrow! I have noticed there is a bit of ‘chat’ about having a theme, but I will just blog about what we eat - it’s hard enough coming up with things for this family to eat let alone trying to follow some of the suggested themes! I have found the master list of participating VeganMoFo blogs here and I am aiming to have a quick look at all the blogs on the list over the next month. It’s alphabetically listed. Which letter will I make it to??