Seriously! Popeye and I decided last night that we would not be attending a family gathering next year. We will try to save our pennies, buy no presents (except santa, of course- but I can't control what the big fella brings the kids!) and hopefully go overseas for christmas - to somewhere that doesn't celebrate it like we do here in Oz. Maybe Cambodia (a suggestion from my sister).

Wow, I'm really venting here. Despite lots of reasons to vent today, only one I will make public (and the rest I will hold unhealthily inside!).

We went to Popeye's Mum's today for lunch. Sitting at the table, YM said 'What's that?' and pointed to some sliced meat.

I got cut off by R, Popeye's (step) Dad who angrily said, 'Let's just say what it really is. That is ham and that is turkey.'

And that was about all he said to me all afternoon.

It made me so annoyed. I may sound mental I know, getting worked up over nothing, but I get annoyed when people want to cover up the truth. And I was speaking to my son. I wanted him to know what poor animal had suffered and unknowingly given its life to feed people who turn a blind eye (or whatever reason they choose to give for their omni status).

Despite my username as Seitahn, I have actually never tried, let alone cooked seitan before. So what a time to try it! Thankfully it turned out fantastic.

I made a Stuffed Seitan Roast (from 1000 Vegan Recipes) and it was surprisingly simple. I was a bit skeptical before putting it in the oven as it looked like a giant turd! 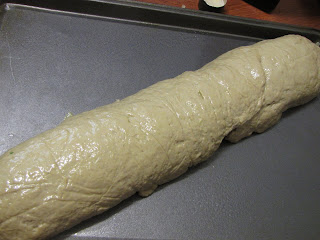 But it looked fabulous when it was carved and tasted great. I made a Basic Brown Sauce (1000 Vegan Recipes) to go over the top. 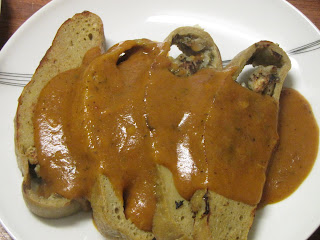 I also tried another recipe from 1000 Vegan Recipes that I had never done before (shows how much faith I have in this cookbook! Making something untried on Christmas Day!). 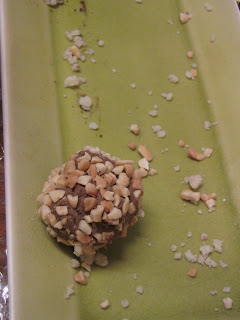 Ok, so this was the last one, and this one I rolled in crushed nuts (the others were rolled in ground macadamia nuts) but MAN they were good!! (NOT good FOR you, mind you!). Little balls of heaven!

The kids had a great time today, and they really seemed to enjoy their gifts. They are just at the right age, too. They really showed their appreciation. It was lovely.

Hope you all had a fab xmas! Can't wait to read what you all got up to today!

Great story you got here. It would be great to read a bit more about this topic. Thanx for sharing this material.
Sexy Lady
Busty London Escorts

Argh that sucks! You can totally vent, you DID call it what it is!

When I'm with my family I just don't engage at all. Saves me a lot of frustration!

Oh that sucks, family can really be hard sometimes. My family have gotten a lot better over the years though thankfully!

Those cheesecake balls looks great, off to google now to see if the recipe is online.

Hey your seitan looks great! I've never made my own before either, if my first attempt is as good as yours I'll be happy.

As for the xmas vent - I hear ya! You said it as it is, they just don't want to hear it because the truth is nasty.

I was unlucky in that my xmas felt a bit sad with only one of my brothers here with me and the feeling it my be my other brother's last. But happy in that I was at a BBQ party with friends and there were HEAPS of vegetarians and I wasn't a freak being vegan! Hooray!

Your truffle looks delicious!! I am lucky that my family is awesome, but Greg's mum is staying with us at the moment & does not get us being vegan at all which is a bit frustrating.

Steph - Thanks. I feel better knowing others agree with me :)

Lisa - I use that strategy with one of my sisters and my B-I-L (and sometimes Dad) but I didn't think I needed to here - most of Popeye's family are vegetarian or vegetarian friendly (one of his sisters is slowly converting to veganism).

Kristy - The Truffles were DELISH! Posted the recipe for you!

Niki - The seitan was also DELISH! I'll post the recipe if you want!! I also felt a bit sad today. I missed my family - most of them are in WA. After going to Popeye's family christmas, it really made me homesick. I wanted my christmas! As nice as it was, it wasn't how we do it (you know what I mean - everyone has a different idea on how to celebrate it)

Vicki - The truffles rock!! (Just the thing if you get sweet cravings!! hehe) Yep, family can definitely be frustrating!!

interesting hearing what people believe is truth and what kids can cope with! My little 5 years old niece has recently discovered that pork is pig and is quite fascinated by it but still eats it - I actually feel more comfortable with people eating meat if they can face up to what they are doing than those who can't bear to think of the poor animals they are eating.

Thank you for your story. I'm glad to hear that most of your relatives are friendlier.

If you are seriously considering Cambodia, you might find my podcast about travelling vegan in Cambodia interesting. It includes an interview with a vegetarian restaurant owner who never found being vegetarian in Cambodia terribly easy.

Oh, and I missed the part about Cambodia. Do it!!! I went there last year (2009 is last year already!) and it was the best place I have been.

Eating was a little tough in that I lived on noodles a lot, but it was nothing to worry about - they make a lot from scratch so if you have the phrase book you can just show them the phrase that says 'I'm vegetarian' plus the ones about no milk or eggs. Cambodia is so great I wanted to go straight back there to live.

Thanks verdantreports! Some interesting stuff on there.

Wow, you went to Cambodia, Niki? Tell me more!!
We are definitely still considering it - just seems a little expensive for all of us. SOunds like it may well be worth it, though!