So much to cook, so little time

The day started with Baby complaining of a sore stomach and asking if she could stay home. She complained that if she went to school and went to the sick bay they would just send her straight back to the class room. She's right. She also was complaining last night too, so I let her stay home. Turns out all she needed was one gigantic turd (!) and she was back to normal. Pity it was too late to send her to school!

I wanted to get a couple of pie tins today so Baby and I jumped on our bikes to head to the shops. I had a letter 'RTS' to post and so we went a different route near the school. Low and behold, who should we see walking towards us was the deputy and principal of her school and Baby yells (and I mean YELLS!) "Hello Mr. ___. Hello Mr. ____!" I could have died! She has NO idea, that child! Too innocent for her own good!

Anyway, the reason I wanted a couple of pie tins was to 'try' a dessert for taking to the vegan christmas dinner we are going to in Frankston on the weekend. More on that soon.

For dinner I really wanted to try polenta. We have only ever had it as a sort of crumb on tofu cutlets. I wanted to make it properly. From '1000 Vegan Recipes' (again, all of tonight's recipes are!) I made the basic polenta recipe, poured it into a loaf tin, threw it in the fridge for a couple of hours and then sliced and fried it up. On top of it I made the Spicy Tomato Ragu (which wasn't spicy because I left out the crushed red pepper), which also consisted of a homemade Marinara Sauce (also from 1000 Vegan Recipes). I had also marked Crunchy Sesame Slaw to make for the kids' lunch tomorrow, so I decided to have that with the polenta. 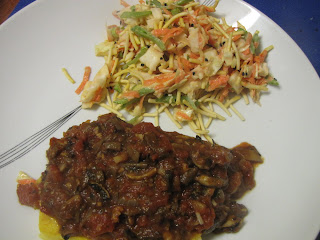 The Crunchy Sesame Slaw was a HUGE hit!! The kids want me to take this to the christmas dinner and it was so easy I think I will oblige them. The polenta was yum too! I'd like to try it straight into bowls next time and see which texture I prefer.

So the dessert. As I mentioned, I wanted to try whatever dessert I decided to take to the dinner early to make sure it is what I wanted to make. This morning I thought I would like to take a simple apple crumble and I found a recipe (in 1000 Vegan Recipes!!!) for an Apple Tart with Walnut Crust and I couldn't resist! It's a little bit more involved than a basic crumble, but SO worth it!
This all started by me thinking about riding my bike with Baby to The Radical Grocery Store in Brunswick for a can of whipped soya cream to take. It got me thinking about making my own and I'm glad I did. I made Cashew Creme (1000 Vegan Recipes) and it was to die for!! Beats the pants off any dairy whipped cream I have EVER tasted! It looked like this: 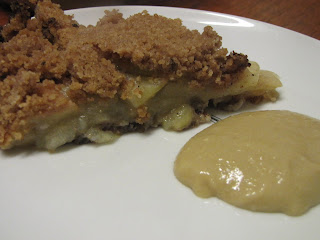 It even tasted way better than it looked! OH SO GOOD! I will be definitely taking this to the dinner (especially the creme!!).

So this is what I have decided to take to the Christmas Dinner:

I know it seems like a lot but there are 4 of us to feed so it wouldn't be right just turning up with one dish to share. Also, I can't help it - I want to show off my culinary skills! I love to see people enjoying the food I have made!

Got to start tomorrow!