I finally got to taste the Buffalo Mostarella uncheese from The Ultimate Uncheese Cookbook. Popeye's sister H and her partner M joined us for dinner (after a long ride on the 112 - they live in St kilda - it takes close to an hour!).

We had a few drinks (wild turkey and coke - mmm) while we waited for the pizzas to cook. So, guess what? Photos forgotten!! There was left overs this morning, and although it is not the same, I have taken a photo of them. 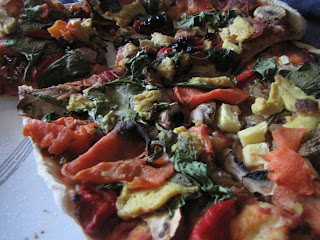 Shitty photo. So shoot me. Anyway, my pizza is loaded with caramelised onions, sweet potato, roasted capsicum, mushrooms, baby spinach, and Mosterella (others had semi dried tomatoes, but I'm not a fan. Nor am I a fan of hot pineapple, which they also had - so clearly this was NOT my pizza). The Mosteralla was REALLY yummy! The only downfall was that is makes quite a bit, and although all 7 of us had large clumps of it all over our pizzas, there is still a shit load left. Now I'll need to find something else to eat it with (darn).

Yesterday we headed into the city. We stopped at the casino to watch the christmas display (which was really good!) before heading to Borders to return a couple of books that Popeye had given me for christmas. I had casually mentioned to him that the reason I turned vegan was the book Skinny Bitch and that I had lent it to a colleague last year who never returned it (it would have been ok if she had turned vegan and kept it, but alas, no). So he LISTENED (wow) and bought it for me for christmas. Except that he got me Skinny Bitchin', which is like a blank journal with little motivational quotes throughout. I'm not much of a journal writer - I'd get excited for a few days and write lots, then put it down and never pick it up again! He also gave me a tapas cookbook, but after looking through it, I found that there would not be much I would make as a lot of it seemed unadaptable, with meat as a focus. I told him that I didn't think I would ever use it and could we change that too (I only suggested it AFTER he said I could swap whatever I wanted. I am not an ungrateful gift receiver). 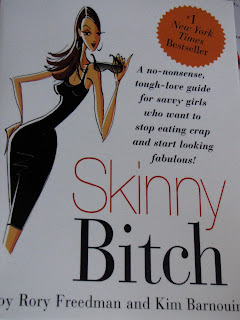 and Vegan Planet (because as you know I love her other book!). 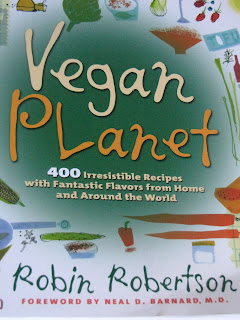 I was really after one of Ani Phyo's raw cookbooks (does anyone have it they could lend to me?) but Borders really only had 2 raw cookbooks and they both seemed overpriced and crap. I was well over budget (as VP was $50 at Borders, yet only $36 at Readers Feast) but Popeye loves me and paid the extra anyway. I was struggling to find anything else I wanted at this book store. I've since found (from Miss T's blog) that Dymocks on Collins is THE ONE to go to for vegan cookbooks (like I need more vegan cookbooks). I also like Reader's Feast, but they had no raw cookbooks. I was determined to only buy Ani's cookbook at Reader's Feast if they had it but walked out of there with 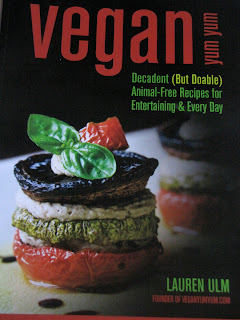 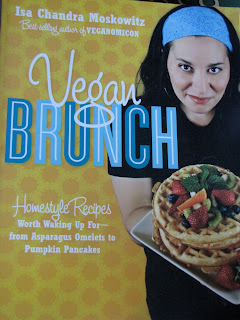 I REALLY wanted a raw book because one of my NY resolutions is to include a raw food day into our diets next year (more on that and other NY resolutions later). I'll have to rely on Google for a while, gosh darn it.

When Popeye's sister came over she brought cupcakes. I also forgot to take photos of those but they were delish! H is planning on transitioning to veganism (from vegetarianism) next year and she has a new love for VCTOTW. She brought VCTOTW and The Voluptuous Vegan with her for me to peruse (so much to read/try/eat, so little time!). Popeye bought a copy of 1000 Vegan Recipes for her yesterday also and she was a tad pleased!

So I have 5 new-to-me cookbooks waiting for me to get stuck into. Which one do I start with first?

Oh snap oh snap! Not only do I have the Vegan World cookbook as well, but I'm also lusting after the Vegan Brunch one - I think we're going to have identical bookshelves! And it was also Skinny Bitch that turned me, and I refuse to ever make any apologies for it. It was my time, and that book was my slap in the face. I really couldn't care less about some of the (not necessarily untrue) criticisms made of it; it was what did it for me and therefore it worked! (And I think I'd really like to try your uncheese)

Johanna - I have a list of the cookbooks I own on the side of my blog - feel free to borrow any :)

I got vegan brunch for christmas!

Another place to look for vegan and raw cookbooks (though they're a bit expensive) is FoE in Collingwood. Because I work in the bookshop there, I'm always seeing the new ones and buying them! :o)

I never thought about FoE. Must go there. Do you recommend any particular raw cookbook?

No, absolutely not querying! i agree; when things taste good, who cares how they came about? But the criticisms of Skinny Bitch, apart from their reliance on faux stuff at the expense of other foods, are also about the way in which they address women who may have a history of EDs, but personally I think that "Beer is for frat boys" is a gem of tough love! I think I'd like to try to colby! :)