Christmas is just around the corner...

With christmas gaining on us all very fast, we decided to put up the tree. We had planned to put it up a couple of weeks ago when mum was here but it didn't happen. The kids completed it by themselves with a jittery excitement. 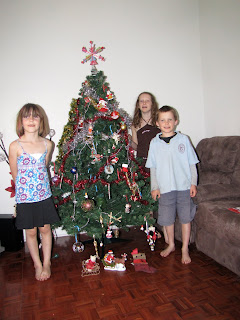 I took a photo of the ornaments that we put on the tree. All of them have been collected in the last 18 months from different locations and have significant meaning to us. All of the other 'crap' ornaments are going to the op shop so we only have ones that are important and evoke wonderful memories. 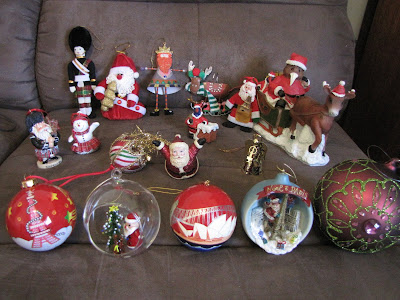 From the back - Bagpiper from Scotland, Santa from Rome, tin santa and reindeer from London, soft santa with eiffel tower from Paris, Kiwi Santa and Reindeer from NZ (Popeye bought me this when he was working through NZ)

We always put a few candy canes on our tree and have fun eating them in the days leading up to christmas. The kids wrote out a wish list for santa, so hopefully he has a bit more of an idea of what to get them!

Changing the subject...Last week YM was asking for sushi for lunch, but I put him off until after the wedding. So today I decided to grant his wish. I knew I didn't really need a recipe but I wanted to use my new cookbook - 1000 Vegan Recipes. The sushi I made had avocado, baked tofu, asparagus and grated carrot. 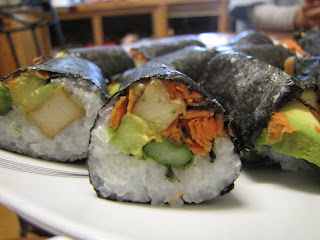 For dinner I made Snobby Joes from the PPK website. Isa's recipe asks for 3 tablespoons of chilli!!! Even a comment was posted about it possibly being a typo, but Isa said it wasn't. I'm not sure what type of chilli powder they have in the USA, but that is WAY too much chilli for my family! I only used 1 teaspoon and it gave a nice mild taste but the kids still needed a cold drink of water next to them! Occasionally one of them would fan their open mouths and pant to ease the heat! I would keep it to 1t next time as well. 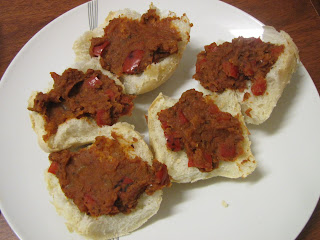 I also made some oat-maple-walnut biscuits from my new book. That's lunch snacks sorted for the week - if I can keep my little mitts out of the container!

31 days til Christmas, 25 days til Popeye is home!