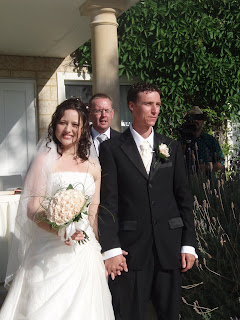 I had a wonderful time in Perth. The wedding was beautiful (with a little bit of quiet controversy, as all good weddings have!). Shani looked gorgeous, and Josh a little nervous!

After all the formalities had occurred, we were directed out the back of the lodge for drinks and nibblies. I asked one of the waitresses if there was anything vegan (Shani had assured me that I was going to be catered for). She didn't come back for about another hour and a half - just before dinner started. She said 'Did you ask me for vegan food? The chef doesn't know anything about it! She was told there were vegetarians, but not vegan. She has vegetarian food prepared. Will you eat it?'

Of course I said NO. She returned and told me that the chef would definitely make me something. This is the yummy entree I was given: 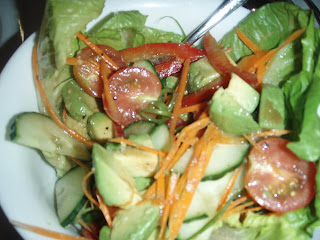 Everyone else had creamy pumpkin soup. For dinner I was given a vegetable stack which was delicious! 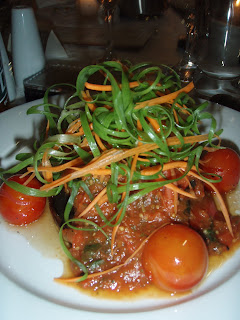 When the dessert was offered, there was nothing for me. So I asked the owner if there was anything for me. Nothing was organised, so I asked for a plate of fruit. I spoke with my Aunty (Leshani's mum) and she said that the owner had CALLED the chef when they were arranging the menu and the chef said she would cater for me with no problem. Aunty was there when they called! I think the chef totally forgot about me, or thought I would eat the vegetarian food. I was made to feel like the chef was doing me a HUGE favour making sure I had food to eat on the spur of the moment, when in all reality, she was well aware months ago! Never mind. The food WAS great!

We stayed in the hotel with other family members. I shared a room with my mum and my other aunty, Vicki (who is only about 5 years older than me) and her partner of 24 years Justin, who had both flown in from NZ for the special occasion. We had to pay $100 each (!) for the room and I got a fold out bed! Ripped off! Nice room though! Vicki, Justin and I smuggled in a carton of beer (we had been warned that no outside alcohol was allowed). Later in the night, Vicki needed to be let into the room (there was only one key between the four of us) and asked one of the managers to let her in. He found a heap of empties on the bench top and then confiscated about half a carton! Shame! (We got it back the next morning, though).

When the night ended and the party returned to the bridesmaids room, there was not much left to drink! Our beers would have been well received! Not sure what time I got to bed, but add on three hours (Perth is 3 hours behind Melbourne, in case you didn't know!) and remembering that I had to get up at 4.30am Saturday morning to get to the airport and you can begin to imagine just how tired I was!

It was a fantastic night, though and I am glad I made it (and I am really happy that there does not seem to be any weddings coming up! They are a costly, costly adventure - even for the guests!). 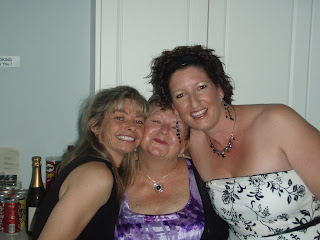 Aunty Vicki, mum and me - I look like a giant next to my short, short family! I am not a giant, but they sure are short!