Baby decided yesterday that she would like to make mushroom pies. I asked her how she was planning on doing it and her idea was to just chop up the mushies, chuck them in some pastry and wack them in the pie maker. Err, mmm, no. Good try, Baby!


So I was on a mission last night, as a good **cough, cough** mother, to find a mushroom pie recipe that Baby would like.
I found this recipe (scroll down to heatherq's recipe)and this morning I made the mix and left it to cool. Because I made the pieces of pumpkin and potato quite small, I didn't need to cook it in the oven for 30 minutes tonight. Instead I put them in the pie maker and made little individual pies. 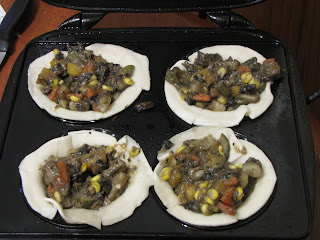 I thought we would need some protein with this meal, and in my quest to try (and love) salads I made a tofu spinach salad. It was quite nice, although I would use baby spinach or mixed salad leaves next time as the spinach (all that I had in my fridge) had a slight bitter taste. 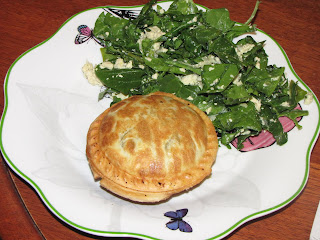 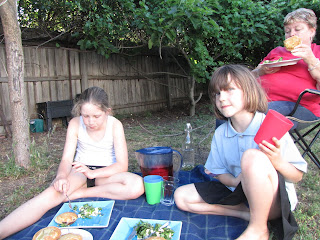 On Tuesday, my mum went down to Seaford to stay with my sister for the night. We met them at Mordialloc Beach which was nice. Here is a photo of my nephew, R. Tweenie, Baby and YM buried him and Tweenie drew a pair of boobs and a g-string on him! 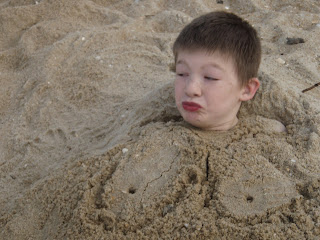 When we wanted to come home we got to the train station at 9.05pm and had just missed the train by 5 minutes. It was a 25 minute wait for the next one. When it finally arrived, a few stops later we had to wait for some dickhead to stop forcing the doors for 10 minutes! The Epping line at Flinders Street Station was then 10 minutes late and we had to go by way of the city loop adding ten minutes to the trip. We finally opened the door of our house at 11.15pm! My poor babies feel asleep on the train! Gotta love public transport at night!


So the next day I kept them home. Tweenie already had an orthodontist appointment to get her plate fitted anyway. We did some learning about Remembrance Day and the kids wrote a poem. Here's YM's (he used my computer so that is why I have access to put it on here!):

The dead under the crosses

Sadness for the dead

The blood of the wounded people

There should be no wars.

Anyway, so on the way to the orthodontist, Baby found a REAL poppy which they thought was great. 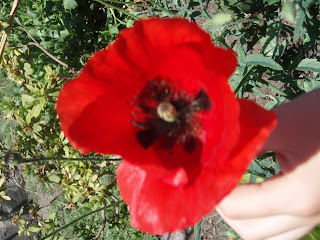 After we went to the Art Gallery again and completed the water trail before stopping off at the AC/DC exhibition at the Arts Centre. The kids rocked out with the guitar! 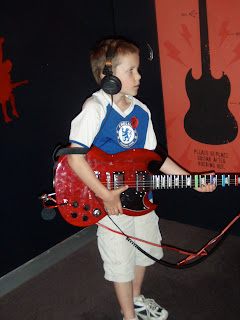 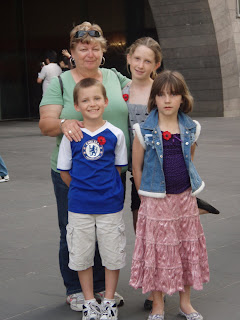 It's my birthday tomorrow! We are heading out to Shakahari so expect a heap of photos on my next post with my friends and family celebrating with me. I am so looking forward to tomorrow night's dinner!

Happy Birthday :) Have a great night at Shakahari.

Those pies look really good & your boy looks like he is having fun with the guitar!

If you still want to borrow the cupcake book, let me know when you want me to drop it off to you. We can meet up for a coffee somewhere if you want.

Thanks for the birthday wishes!

Vicki - I would love to borrow the cookbook. I'll add a comment to your blog and we will arrange a 'date'!

Johanna, I agree! The joys of home schooling! I'm trying to do it every opportunity! Their poems were all great. Very imaginative.