A Day of Fun and Food

We've all had such a fun day today!
This morning Popeye said to me, "What do you want to do today?' I said, "I want to play games with my kids all day.' And that's what we did.

First Baby wanted to make breakfast pancakes (and she is still learning to cook, read recipes, use the hotplates etc, so that usually means I get to cook!). Instead of doing the trusty pancake recipe that Tweenie and YM make (by themselves) I can't help myself and I have to try a different recipe.

I chose Spiced Apple Pancakes from 100 Vegan Recipes (p. 515) which turned out to be a long process (mostly because Baby was 'making' them, so it always goes slower!). 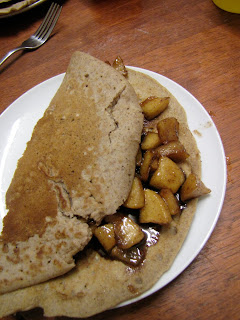 It was well worth the wait. Very, very nice. The apple topping was good!

Then we decided to have a game of Earthopoly (which is like monopoly but focuses on the earth). The whole game is earth-friendly. The board, money and cards are printed with soy inks. The game pieces are recycled bits and bobs. And you collect Carbon Credits instead of houses. Very cool.
Normally when we play we use the 1 hour game rules to make it fast, but today we played the WHOLE game from start to finish! It was well past 6pm when we actually had a winner (Popeye was declared the overall winner - he kicked our butts!). 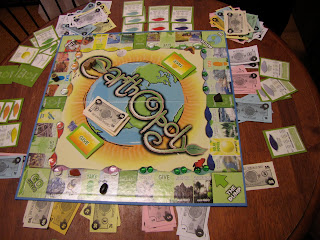 We stopped for lunch and I made some burgers with left over bits and pieces in the fridge. After a short break we resumed play.

Just near the end, when I finally got out, I decided to make us all banana icecream with a delicious Fudgy Chocolate Sauce (From 1000 Vegan Recipes, p. 498). 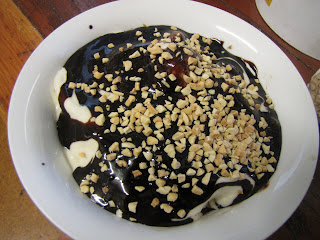 Amazingly good, and so quick and easy to make! I finished making it just as Popeye and Tweenie finished battling it out for the winner's title (it was always going to be Popeye, though!).

After eating the icecream we had a sudden urge to go for a bike ride after being inside all day. Popeye put his bike back together (after dismantling it to get it home from Sydney) and off we went. We stopped at the Velodrome in Brunswick and ended up having fun competing against ourselves in 'time trials'. Popeye's back brakes got stuck on and he had to ride it all the way home like that!

We didn't feel like much for dinner and I wished I had made another batch of Uncheese so we could have toasties (I thought of this because I was flicking through The Uncheese Cookbook by Jo Stepaniak trying to find a G/F recipe to take to the next potluck with a 'cheese' theme for Kristy who has just discovered she is coeliac). I came across Gooey Grilled Cheez (pg.141) which was a really quick recipe to make a gooey filling for toasties. Very cool. 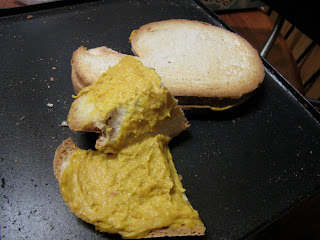 The kids are still all sleeping in the tent (I had told them the tent pulling-down day was today, but after hearing it is going to be 43 degrees (that is, F@*K'N HOT) I left it up just in case I can't sleep in the house tomorrow night). I think they are all stuffed (as are we!!)

In a large saucepan, heat oil over medium heat and add onion and cook until translucent (about 5 minutes). Add remaining ingredients and bring to a simmer. Cook over low heat, covered, for 10-15 minutes, stirring occasionally. The tomatoes and peaches should be tender but not mushy.
Taste, adjusting the seasonings if necessary, then simmer, uncovered, over very low heat for another 5 minutes. Transfer to a bowl and cool to room temperature before serving. If not using right away, cover and refrigerate until needed. Properly stored, this relish will keep for 2-3 days.
Posted by Tahn at 11:14 PM

Thanks for thinking of me, I was just wondering yesterday if any of the recipes in that book are g/f.

although i'm not a vegan this looks delicious!
can't wait to give it a go

Kristy - I'll need to go through it (the book) with a fine tooth comb. I want to make sure whatever I choose to take you will be able to eat. No hidden nasties :)

Dress up games & Polka Dot Rabbit - these really were GOOD!!

Johanna - Hope you enjoy the relish. I actually preferred the chutney, but only because it is sweeter than the relish and I'm such a sweet tooth. The relish was good too, though!

Oh, that fudge sauce looks angelically good! And what a great day!