I decided to test out one of my new cookbooks on New Year's Day and I made a couple of dishes from Vegan Yum Yum. I made Corn Fritters as well as Candied Lime Sweet Potatoes. I also made Brussels Sprouts with Shallots and Dillweed from 1000 Vegan Recipes (although minus the dill as I didn't have any and Popeye suggested that I use some lemon pepper seasoning). 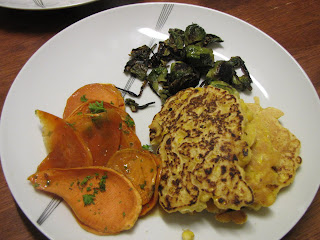 The meal was really nice. The corn fritters were a little dry (the last few I have made have been a little dry also) but the excess syrup from the sweet potatoes added moisture and flavour. Ulm (the author) suggests 2 sweet potatoes for the candied lime recipe although I only used one large-ish one (I'm not sure what size sweet potatoes are in the US, but 2 was definitely WAY too much).

My memories of brussels sprouts are as a kid, with a boiled or steamed mess of mini cabbage-like green balls on my plate, being forced to eat them, sitting at the table for hours until I had, blocking my nose with one hand while nibbling and gagging on the sprout in the other, and eating cold, disgusting mush (we weren't allowed to reheat them). Two things have ultimately come out from those bad childhood experiences:
1.  I never make my kids eat anything they don't like (although we have a 'two bites without a fight' policy. This means that they must take at least 2 decent bites of anything before they decide they actually don't like it - more often than not they actually do like it - they tend to be put off by the look of food. Having said that, my 2 fussy eaters - Baby and YM - are really no longer fussy since becoming vegan. YM was just telling me the other day that he loves anything I cook!) Opps, sorry, I digressed!
2. I have NEVER eaten brussels sprouts as an adult...

until now! They were really delicious! The best thing about becoming a vegan is all the new, exciting and wonderful food that I am eating. It's food I would never have considered as an omni. We really are lucky with the amazing food choices we have available to us, without the harm of a single animal.

Proud to be vegan

The food looks great, and I agree, veganism opens up a whole new palette of flavors and ingredients to explore...I feel like my repertoire is much larger in the kitchen now then in my pre-vegan days.

I agree too Tahn. I eat so many things now that I never used to eat, it seems crazy that having cut out some food groups I have found so many more things to try. I'm guessing because I don't go for the usual cheese on toast or meat and veg or whatever means I actually think about other things to try out.

PS. How cool is it that Baby and YM are no longer fussy!