I had a go at making seitan the other day (well, technically I made it once before as a roast for Christmas) and turned into Kebabs (1000 Vegan recipes).
I made the marinade and left the veges and seitan in for a while to soak up the flavour. Turned out really nice, but YM was not a big fan. We used the peach chutney on the side (that chutney was soo good!) 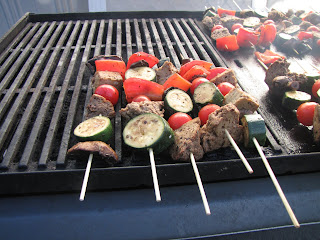 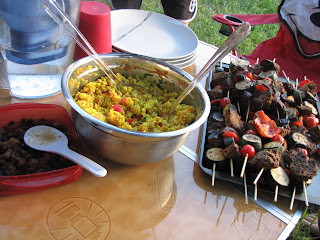 It was such a lovely night we decided to eat it outside. The tent was up in our usual eating spot so we had to set up further down the back of the yard. Unfortunately, it was just far enough back to keep getting massive wafts of car wash wax which was spoiling my dinner (I have a car wash on one side of me - can get quite annoying at 3 in the morning on a Friday/Saturday night when pissed people want to wash their cars- noisily! Who the fuck washes their car at 3 in the morning, I ask you??!!) 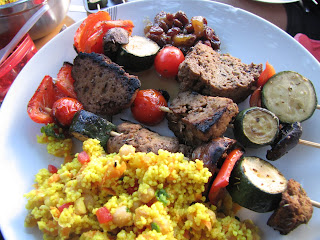 Anyways, the salad was a couscous salad which was actually called Golden Couscous Salad (1000 Vegan Recipes, Pg. 86) and used all things yellow-ish only I didn't have any yellow capsicum. So I put in red capsicum and we called it sunset salad - which we think is a far better name!

Today we went for a bit of a play at the park, as we do a few times a week. It was heaps of fun (it always is) but we often compromise our dinner meal. Or we have it REALLY late. But I had a brain wave tonight (and I am sure lots of other people do this - but as usual I am only just getting it now!)

Previous to this thought, I decided that I want to get up earlier and do heaps of stuff rather than stay up really late, do nothing but watch the box, and struggle in the morning. On that really hot day I was awake at 4am and up at 5am. I pottered really slowly around the house, cleaning up and generally having some time to myself - but productive time. So this is what I am slowly going to aim for when I get back from Bali. By that time, Popeye will be back at work and commuting back and forth from Cerberus every second day or so and will have to leave VERY early in the mornings to get back to work so it will work quite well I hope.

Anyway, the thought. Usually after late arvo exercise no one really wants to eat a huge meal, let alone cook one. So I am hoping to change our meals around (from the way I have been brought up - we tend to follow that example, don't we??). So, I will (hopefully) get up early, make a BIG breakfast, have a MEDIUM sized lunch (stuff we would usually have for dinner), and after the kids do some homework, we can go out for some fun and exercise and come home, shower the kids and have a LIGHT dinner such as a smoothie in summer and a thin soup in winter. I hope it works.

I get my hair-brained schemes from my mum! She is always coming up with something, reading something, or trying something. Not all things stick, though! Some things are just great thoughts!

We'll see how we go! It sounds good in theory...

That sounds like a wonderful idea and dinner looks amazing! :) Keep us posted on how the switching of the meals works.

Who washes their car at 3am? Someone who has just commmitted a MURDER!!! (Or a taxi driver.)

I still have that chutney in my sights

Haha, Lisa! Now you have me worried!

If it was 'normal' people washing their car at that hour it would be fine - I wouldn't hear them. But it's not! It's loud, yelling drunks! With a car full of other drunks, music CRANKED, and 3 other car loads with them. They do the same things other pissed people do,(like run around being noisy) as well as wash their cars!!!
Think about it - not a good combination! Oh well, I'll get over it!