A while back my friend invited us out to help celebrate his footy tipping win. We were going to head to Shakahari, but his wife, who is a vet, returned to Saturday work recently. Unfortunately Shakahari are not open on Sundays, so we went to Soul Mama in St Kilda. I have never been there before either so I was looking forward to it (he was shouting so that was even better!).

The kids and I took a tram into St Kilda that took 1 hour. This apparently was quicker than the other couple invited - they drove in and it took them about 1hr and 15minutes! (Bumper to bumper on Punt Road) Yay, public transport! Anyway all 3 ladies chose the main meal/dessert option while the blokes went down the large 5 mains and rice without the dessert path. Our meal came cramped in a bowl with 4 small main choices with rice in the middle (I totally forgot to take a picture, even though I purposely kept the camera on the table! Doh!). The boys came on a tray that had separate sections for each of their large mains. I took a photos of A's just as he had started to eat. 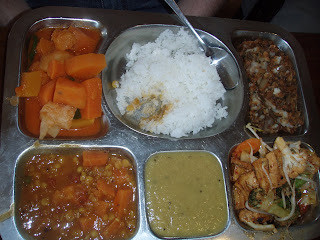 This was a good idea as it kept all individual dishes separate. Although the food was nice, I felt that my bowl turned into one big mush pit, with all the flavours mixing in because they were not segregated. I also felt that the food was perfect for new vegetarians or omni's dipping their toes into vegetarian food. Without sounding like a food snob, I feel like I have made better dishes in my home. I was hoping for something that would blow my socks off I suppose.

For dessert the 2 other ladies chose sticky date pudding but I wanted something a bit different so I picked  Raspberry Truffle Cake. 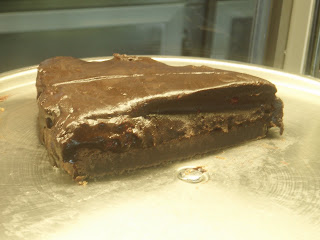 AGAIN (!) I forgot to take a piccy, so I had to get one through the glass as we were leaving. Very nice, but VERY rich! I don't remember the raspberry that much either. I really liked the soy cream!

There was a lot of people there so the atmosphere was excellent (and what a fabulous day for being near the beach!). I found that it was really hard to hear each other talk and it seemed as though I was shouting to be heard. Near the end of the day (we were there for nearly 4 hours!!), people left and the place was getting empty, but the music got louder and I still had to shout!

Besides all of that, the food was good and the company was even better!

Anyway we came home and I started to get us ready for school/work tomorrow. I made us all a salad and crumbed some tofu in polenta and cooked it in the oven. We'll add it to the salad in the morning. 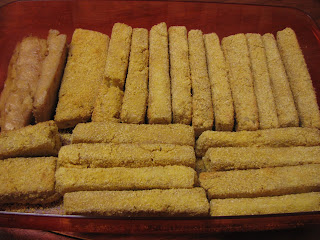 We also had blueberry banana sorbet that we made yesterday for dinner/dessert. 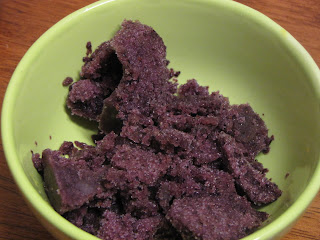 Yesterday after we made it, we stuck it in the freezer for only a couple of hours and I like the taste of that -soft and smooth. So 24hours later, and it was a lot more icy, but still delicious.

Chuck it all in a blender and blend until well mixed. Can be eaten straight away; after a few hours in the freezer; or leave overnight to really freeze.

Well off to work for me tomorrow. Looking forward to it but a little nervous as I have stayed away from the classroom all of this year. I'm sure it is like riding a bike...

I feel the same about soulmama, could definately make better food at home.. you pay for the view and I find the service really bad... I think it should go all out fine dining instead of this weird inbetween gopas and shakaharis thing it has going...

that being said.. I go to st kilda about once a year so...

yup, same feelings here - i've only been once but i found the food WAY too expensive and pretty average for what you pay for. the service was non-existant and the whole ordering systems so complicated and unneccessary. Haven't been back since and i really don't plan too. also, there were hardly any vegan choices when i went. what's up with that!?

I'm glad I'm not the only one who feels like that. I sort of feel guilty because we don't have many choices of eateries and I shouldn't be dissing them, but I feel better to know others think the same :)

Heya I'm glad you had a good time - i did too :) A and I agreed the food was pretty average. The service WAS bad! The waitress forgetting our hot drinks was annoying. And yes the whole odering ticketing thing was just weird. The location/views are spectacular but then there is this cafeteria feel to the place but $$$ menu. Was still heaps of fun though, although I don't think I will go back there.