Zucchini is coming out of my ears!

On Saturday we got to the Markets VERY late so we didn't have much choice left. It was 15 minutes before closing and the stallholders were getting rid of the last bits of fruit and veges. I managed to pick up a dozen zucchinis for $1! So I have been trying to find yummy things to do with them before my pets (the worms) get to eat them.

So I found this recipe for Vegetarian Chilli on the Supercook website (there is a bit of a theme going on here with the Supercook website this week!). I know most of you will have your own chilli recipe you use, but I haven't got 'one' yet and found this one to be SCRUMPTIOUS! Every single one of my babies LOVED  it. I used up 2 of the zucchinis in this recipe, changed the 2T of cumin seeds to 2t (still could taste it but not overpowering - too much spice makes for whingey kids!). I'd also add MORE sweet corn as I am such a fan of this vegetable (that's because I am such a sweet tooth!). I didn't have an extra can of whole tomatoes so I left it out, but next time I would try it with 2 cans of chopped or some fresh chopped tomatoes. Other than that, I think this recipe is a keeper for us. Maybe it will be my 'signature' chilli! ha 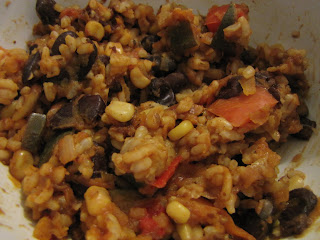 Oh, and I had a TINY bit of left over rice from last night that I added right at the end.

I went to the 'Nong today to help my BIL with his website. I tried to find the new Vegesafe cafe for lunch (was suppose to be on Foster St), but could not find it ANYWHERE! Very disappointed as I was hoping to see what they had, give it a go and review it. If it is there it is hiding and not very noticeable - if a vegan looking for it can't find it, how are the general public going to go! Shame, really, was looking forward to it.

On the way out my sister and I stopped at Savers. Wow, that is a big store! Very neat, orderly and set out. Lots of kids clothes too, so I promised that I would take the kids there one day (they'll love it!). All we pulled up in a parking spot and were putting some coins into the meter, an average looking, nicely dressed bloke came up to us and said that he had just had his wallet stolen and really wanted to buy a jacket in the Salvos (that store was right where we parked) for $5 and could he swap some cigarettes for $5. My sister said she had no money but I knew I had a $5 note and although I am on government benefits (dole bludger!) I reached into my bag and handed him some money. He looked at me, took the cash, started to walk off, then turned and said thanks. Then he started to walk in the OPPOSITE direction of the Salvo store! Rude. Anyway, we went into the Savers store and after 10 minutes in there the same dude walked up to us and was about to give us the same line again but you could see in his face he recognised that we had already been suckered into  handing over money and he promptly turned and got the hell out of there. You, know, it really annoyed the crap out of me because 1. I have NO money (I haven't been paid for the teaching work yet) and 2. It makes me think twice about helping out these people who REALLY need help. I bet he makes more in a day than I get from the government with 3 kids in a week! So wrong and again, I feel embarrassed that I got suckered in again!

what a jerk! creative line though.
try the zuchini in a cake - it makes for a really moist chocolate cake

Ugh, what a scum bag!
Can't believe he was about to do the same line on you again!

I'm yet to check out Savers, I've heard good things.

Which markets do you check out?

Thanks for the cake idea, Philippa!
Niki, I really like Savers (or any op shop, really!) I've tried the one in Brunswick and now the one in Dandenong - which seems to be bigger and definitely better organised. I also have one almost opposite me (well 2 small streets away) that is not a savers but it really quite big.
I only really go to the Preston Markets because it is a short walk away. I try to go right near the end for the bargains (best for dole bludgers like me!!)

I agree Johanna! I thought of that afterwards! I was sort of caught off guard, but will try to remember to offer to go and pay for the goods they are after instead of just handing over the cash.

Unfortunately, the zucchini decided to go soft today. you know how they are good one day then they go bad the next - well that day was today! Never mind, I got to use most of them and I maybe should have make stuff with them on the weekend, but all the cakes I found have sooo much marg/oil and I am really trying to avoid so much crap!!

Oh well, two lessons learnt! That's what life is about...

hey tahn - just found your blog. i'm super excited to read a blog by a melbourne vegan, you'll be bookmarked for sure.

i found you through google because i'm going through dandenong tomorrow and wanted to check out the vegesafe cafe. i can't find a website or an address online and their facebook page seems to have disappeared.

do you have any idea what happened? did you ever find the cafe?

I have no idea what happened to that cafe. I haven't heard any more about it. Did you find it? I gave up looking! It must be so well hidden...