I'm watching Good News Week as I post, and the panelists were talking about how chickens only have one 'exit' hole. Tom Gleeson said 'An unfertilised egg is really just a convenient period'. AWESOME!!! That's pretty much what I say to people about eggs!!! Got lots of  eeeww's and screwed up faces, but also it hopefully got a few people thinking!! Nice one, Tom!

Recently, when I discussed in a previous post that I would like a website that you can just put in the ingredients and it spits out a suggested recipe, Vegetation came to the rescue and suggested I try Supercook.
It is a really good site. Once you sign up you can add the foods in your kitchen and it will suggest recipes from all over the web. You can even exclude items!! So then you only get vegan recipes! NICE!

So we tried a few recipes tonight. First, for dinner we had Stir Fried Sesame Vegetables with Rice. This got rave reviews on the website and it was REALLY nice! But...it said it served 4 people, but I think it would barely feed 2. I had a tiny, tiny serve and the kids had a small serve and we really did not have enough to feed us all. So I would probably triple this recipe next time. 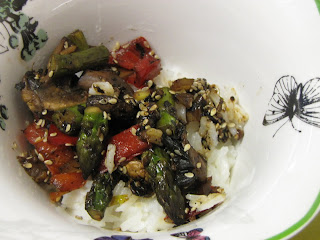 You can see how tiny my serve was!

While I was making dinner, YM was in charge of making 1 Pan Fudge Cake. The beauty of this cake is that it is made IN THE PAN!!!! No dishes!!! How cool!! 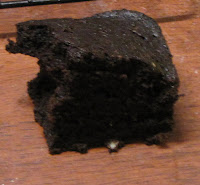 Ok, so, we ended up leaving this in the oven for 50 minutes instead of the 25 minutes the recipe states. BUT, after eating it, and noticing a small vein of 'fudginess', I totally believe we overcooked the cake. It seemed WAAYYY too runny at the 25 minute stage, but next time I'll get it out and let it sit and see if it fudges up more, because the fudgy vein is DELICIOUS!!!! Also, even though it says to do it in an ungreased pan, I may try lining it with baking paper. Although, maybe if I only cooked it for the 25 minutes it may have come out easier. I'll try it again tomorrow.

So, Monday over, work tomorrow. It is suppose to be 28 degrees tomorrow so I may get to wear a skirt :) (one of my goals is to wear a skirt or dress once a week). I'll see how I feel in the morning when I put it on!
How gorgeous was today's weather??!! I made the most of it by mowing the lawn, trimming up my roses and taking the kids for a bike ride (while I jogged) to Coburg Lake. Tomorrow I also have a 'handyman' coming to check out the tiling I need done in the bathroom. I have got a bit of work to do to get this house ready for rent early next year. Hopefully, they don't want to charge me too much!

I need to check out that Supercook website, it sounds like a wonderful recipe source! And that 1 Pan Fudge cake? Gah, why couldn't I have found your blog last night when I had some chocolate cravings? Pretty sure they'll be back though, definitely bookmarking that recipe!

Hey thanks for the link - Supercook sounds great!

i am intrigued by the website and cake recipe. i'm compiling simple recipes because I just started cake making for Lentil at the convent (yay!)

It gets better once you sign up? Awesome! I typed amaranth in the other night and only got 4 hits so I was worried I'd given you a crummy website!

Ugh, I hate nights where meals don't make enough. I cooked up a pasta bake a few nights ago and afterwards we were all still ravenous (so out came some banana smoothies).

I am loving the look of that fudgey cake! YUM!